Masonic groups out of date in Northern Ireland?

The Royal Black Preceptory is a ‘more religious’ set up to the Orange Order in N. Ireland. When asking for the symbolism of the date, the last Saturday of August, the reply is simple and enigmatic: it’s a religious day. What religious day it is, is uncertain to me and also apparently uncertain to the band members who play the accompanying march music; I thought perhaps members of the Royal Black Preceptory might be more helpful. This was not the case, and I sensed some amusement in their discretion, and surmised that the details were ‘a matter for initiates only’. Yet it is apparent that the mysterious nature of semi Masonic groups is where a lot of their appeal lies, aside from the obvious networking and community watch/security. This was explained to me by the Caledon Order’s treasurer, who is also a labourer and farmer: ‘We like to keep it mysterious in order to make it more elite’.

Black Saturday is the last day of marching in August and for The Royal Black Preceptory in Northern Ireland one of the most important dates in their marching calendar. The event begins with meeting at the local base for the Orange Order. This being a bar, drinking starts early at 8.30 a.m. The band is assembled on the main street of the village of Caledon, various hung-over band members and Royal Black Preceptory initiates getting ready. Once in order, the large drummer begins with an almighty walloping of his base drum and soon the tapping rattle of the snares begin. A banner depicting Elijah in a scene of the Old Testament has the sheen of a somewhat newly made cloth, and stands on two ornamental spears at the front, then the flutes begin and the marching starts.

The Caledon Royal Black Preceptory was set up before the turn of the last century. The Institution itself was set up in 1797 two years after the advent of the Orange Order in a village in Co. Armagh. The concept of Catholic second class citizenry is a popular description of the dynamic between the Protestants and Catholics in Northern Ireland. And it would seem to lend itself to the idea of a creation of a Protestant elite. These could be held together through grassroots societies like the Orange Order and other semi Masonic organisations. When Irish home rule is seen to threaten, these organisations in theory mobilise in a highly organised and effective manner, with a set hierarchy, whilst eulogising on the democratic nature of their protest. This is a protest that has its roots in the times of William of Orange and James II. The conflict was rooted on the premise that the Catholic King James would dissolve parliament, and relinquish the democratic process celebrated in England after the advent of Protestantism and the separation from Rome.

Whilst this battle changed the course of British history at that time, it stands today in Britain’s Northern Ireland as a somewhat embarrassing cause. Protestants in England don’t so clearly identify with the Catholic-bashing sermons often popularised by the likes of Ian Paisley, but more with the softer eulogising of multiculturalism. As the pendulum of power seems to be swinging in the direction of Irish nationalists, Protestant groups like the Orange Order in Northern Ireland find themselves increasingly out of step with change.

A friend who had previously been in the Ulster Bs (which acted as a sort of ‘reserve police force or armed protestant militia), said that these organisations are going out of date. The threat of violence all round seems less pronounced, and as the Protestant elite seem to be moving increasingly out of positions of power in government, their elitist organisations seem to be losing ground. A neighbour said he’s the only one who still flies the Union Jack outside his house on the main street these days and that young people rarely seem to be joining the Order. Although he sends his family to an Ulster Scot holiday camps to learn about the plantation heritage and marching songs, it would seem that the Protestant youth are finding less reasons to sign up to these institutions.

When confronted with the marching band and even the Preceptory members as a group of new friends, I found it hard to find a reason to deprive them of their rituals; perhaps it could be seen as gentle rivalry? Its legacy of pro-democracy could be shared as reason for remembrance. But then the connotations also factor in the elitism of Protestant lodges and the colonial plantation era. There are reasons to celebrate, and the survival of the marching bands and parades could hinge on which pieces of history they choose to commend: the colonial, or the pro-democratic. It only seems ironic that this democracy should extend to Protestant and not Catholic and it seems that this inherent form of discrimination should be snuffed out or the retribution would be compounded by future generations, and in turn it seems that it has. The new wave of business friendly politics seems to be intent on progress and through the medium of the economy it is hoped that sectarianism will be set to one side. 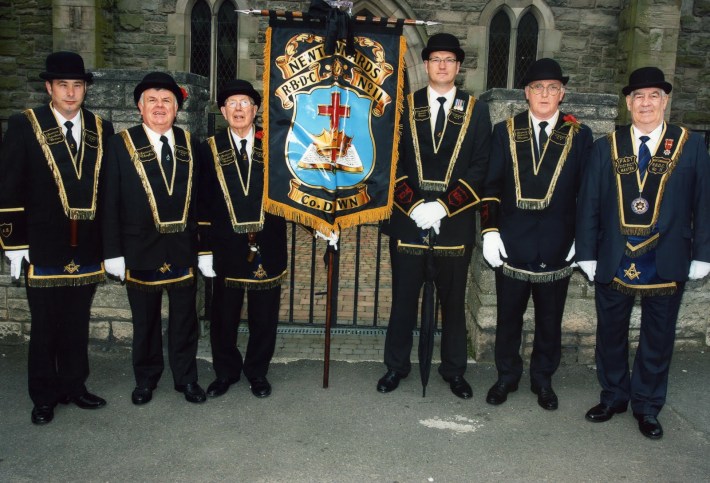 It seems that a powerful variety of symbolism and historical legitimacy in weaved into an idea of superiority that, on a very basic level, is a community day out to the sound of rousing music. The pipes and drums, the uniforms and banners, the mysterious symbols and flags with religious iconography, what do they mean today? They probably represent the frontier psychology of an embattled community, a community that feels that their raison d’etre is under threat by policy makers in London and increasingly Stormont. A community that is hanging onto a colonial legitimacy based in history and yet out of date.

A Tyrian Odyssey →
Join 542 other subscribers