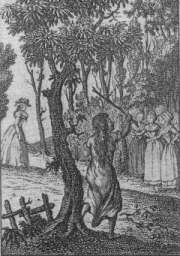 No images exist of Memmie, except for this naive engraving, which may not even be a likeness

Last autumn I decided to conduct research into the phenomenon of feral children.  I had the idea that there was something to learn about innate human nature from them, from being raised outside of human society, unsocialised.  I wanted to see what traits the different feral children might have shared.  This turned out to be very naïve though and I learned a lot… about how feral children are never wild, innocent and primal individuals, and how deeply socialised they are, by whatever their surroundings may be.

They seemed to show that human children imprint strongly, in a social way, on whatever is available, like chicks imprint on the first face they see.  We are born like social clay, born to be shaped, moulding ourselves inevitably on anything we can mould ourselves upon.  There is no unsocialised human.  Our innate selves are to be socialised. We are intensely social beings.  None of the children were unsocialised: they had imprinted themselves upon their circumstances.  The forest and the wild had socialised them.

There was also the problem of the records.  Many of these reports came from the 17th and 18th century, and written by an era where doctors and scientists quite seriously wrote reports on women giving birth to kittens and litters of rabbits.  You didn’t quite know what to believe, and in addition, their reporting wasn’t terribly scientific.  Their angle on a feral child was very different.  They weren’t interested in the feral child as they were when captured, in their behaviour, in their vocalisations, and only commented on in their habits when they were especially quirky.  The reports had no soul or compassion either.  The reports were about civilising them.

But more than anything, as a woman and as a mother, my heart was broken for them, and that maternal urge to comfort them, help them, empathise and love them: to give them what they never had, was so intensely strong that it was often hard to continue to research.   They lived long ago.  There was nothing I could do, but that didn’t quell the ache inside me to nurture them.

The child that affected me most in this sense was Memmie, the wild girl, captured at Songi village, in Chalons, France in 1731.  Her age in unknown.  She was reported to be a child aged about 9-11 years old, but in fact may have been a young woman.  It is uncertain but the consensus among the villagers who witnessed her appearance is that this was a child.  She emerged from the forest, black all over her body, and of a very wild appearance, holding a club.  She encountered a startled villager and his dog, which barked at her.  Running at it with her club, she beat it to death, and then then stood over its body exultantly, glorying in her victory over the animal.  Then she ran up a nearby tree and fell asleep.

The village of Songi, in Chalon, France.  It was here that Memmie first emerged from the forest

Villagers struggled to know how to approach her and their local aristocrat Viscount d’Epinoy.  He decided she must be captured and saved, but this grew to be a greater challenge than expected.  She would not come down from the tree.

Still up the tree and now very frightened, Memmie was growing hungry and thirsty, and it was decided that a local motherly woman should go to the bottom of the tree with food and drink, and coax her down with kind words.  It took a long time, with Memmie sometimes starting to descend, but then losing her courage and running back up the tree, but eventually her trust was won by the woman and she slowly and carefully descended the tree for the food and the drink, and perhaps also for the motherly love and kindness being shown to her.

However, this was a trick.  There was no motherly love from the woman.  Memmie was leapt upon by the men and dragged away, terrified and frantic to the chateau, where she was shut into the kitchen.   Here she grabbed a dead pheasant that was for the pot and devoured it with her hands and teeth, feathers and all.  She must have been starving.  I think that’s why she left the forest in the first place. 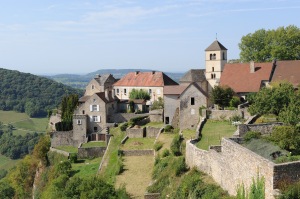 The Chateau at Chalons

To his credit, Viscount d’Epinoy developed an immediate paternal love for Memmie and became her greatest defender.  Seeing that she was healthy and happy on raw food and wild food, he ordered that her chosen diet be the one she should be fed.  Cooked food made her vomit.  Memmie seems to have thrived at this stage of her life, with little pressure placed on her to conform, though she was placed in the care of a shepherd (from whom she kept escaping), but she visited the chateau often. Her skills in escape meant that people gave up, and Memmie spent her days playing in woodlands, climbing trees and catching her own meals of fish and rabbits. always returning home to the shepherd or Chateau.

Under their care it was found that the black substance on her body washed off, that she could only communicate in shrieks and grunts and that she did possess a dress, and interestingly also some necklaces and pendants.  Under the Viscount’s care, she slowly became socialised to 18th century life in her own time, learning to accept human touch (which at first terrified her) and picked up some French.

It was with the death of Viscount d’Epinoy that Memmie’s fortunes changed for the worse.  Placed in the care of a convent, her raw food diet was denied her, as were her wild outings.  She was assertively civilised, and Memmie nearly died, becoming a shell of the girl she had become.  She lost weight on her enforced diet of cooked food and became very weak, depressed and ill.  I suspect she was grieving for the Viscount, for the shepherd and his home, and for her happy life of freedom that was now lost.  However, a visit from the Queen of Poland, who was very curious about the girl, gave her a taste of her old life and self.  The Queen took her hunting and Memmie ran and proudly caught while rabbits with her hands for her.  I think this visit would have been very joyful for Memmie, to be back outdoors and revisiting her old way of life.

Memmie grew into a young woman at the convent and in time, she did adjust to 18th century life, and regained her strength.  She moved to another convent to become a nun, though again nearly died there when a window fell on her head.

From here, Memmie was forgotten to the world until she was visited by James Burnett, a future Lord, in 1765.  Memmie was now ill and impoverished, living alone in a room in Paris, struggling to make a living as a curiosity.  Here she told Burnett her story.  At this point, I do wonder if Memmie had much to gain from embellishing her history, to earn more as a curiosity and escape the poverty she was suffering.  However, parts of her story do make historical sense and this was the first time she had been able to provide her history before she was capture by the Viscount.

Memmie remembered being stolen as a child for the slave trade, but she did not know where from.  Before being sold she had been painted black, which is now known to have been a slavers practise with white slaves of the time.  Once sold, she was regularly beaten by her owner, but protected and loved by his wife.  Eventually she was involved in a shipwreck with another slave girl, possibly an African girl.  The two girls were denied rescue from the water, and were left to drown, so they supported each other and swam for land.  Memmie said the other girl could not swim well and so clung to Memmie’s foot all the way.

Once on land they travelled far and lived a wild life for an unknown time.  The two girls could not speak each other’s languages and so began to communicate in grunts.  They fed on roots and wild animals, and Memmie said also imitated birdsong, which she said was the song of her native land.  Just before Memmie had been captured, she had a sudden fight with her companion and injured her head which she dressed with a frog’s skin.  The two girls parted company and her next memory was appearing at the village.

Where Memmie had been born will likely never be known, but slavery is possible, because of her memory of being painted black, which is historically valid.  There were certainly white people being taken into slavery at this time, from both white and African slavers.  Indeed British coastal villages, especially in the south, lost large numbers of girls, snatched for the Barbary slave trade and I’m sure slavers were happy to trade slaves with anyone.  The tradition of birdsong is a mystery.  Maybe Memmie was remembering people whistling tunes.  We don’t really have much in the way of a physical description for Memmie, to help estimate where she might have been born.

After this encounter with Memmie, no more is known.  She disappears from the pages of history completely, her future even more mysterious than her past.

I feel though that Memmie recovered from her ordeals better than many other feral children did, and in spite of her very traumatic capture, I do think that the love and care provided for her by the Viscount may have made a great difference to her outcome.  ‘Civilisation’ was not forced upon her under his care and she was allowed to adjust in her own time, while knowing also that she was loved, and while still being permitted to run free, hunt, climb and swim: to stay wild.  If her memories are true, then the love and care from her slave owner’s wife would also have nourished her emotionally, and it may be that she came from a loving family before being captured.

I think this is why Memmie touched my heart.  I wanted to be that mother at the bottom of the tree, but not for her to be captured, but to be her mother and I think that would have given her the best future of all.  For all any child needs is simply to be loved.  Even a brief spell of love can arm them for anything the future may bring them.

← The invention of leavened bread, or “which fool spilled their beer into my freshly ground flour!”
The Last Order of the First Crusade →