The evolution of walking (bipedalism)

We are seen as the only great ape to have stood upright and taken strides forward.

Why this event took place is surrounded by a lot of hypotheses.  These include

2. brachiation hypothesis: it evolved from walking in trees from branch to branch (Gabo, 1996)

3. pre-common-ancestor hypothesis: that our common ancestor with chimpanzees was bipedal (author’s own consideration)

5. The controversial Aquatic Ape hypothesis: that it evolved from wading in lakes and rivers (Morgan, 1997).

So in this article we’ll be looking at

a) how other species walk upright,

b) why the human skeleton is specialised for walking, the problems that causes us, and

c) why it might have evolved covering the 5 points above.

First though, a little background to help:

Bipedalism (where the skeleton has become dedicated to it) and tool-making are traditionally seen as the first defining marks of humans in the archaeological record.  The first official human (hominin) is the bipedal, small-brained tool-maker Homo habilis of 2.5 million years ago.  For a long time, the first bipedal ape (hominid) was accepted to be Lucy, the Pliocene Australopithecus afarensis 3.6 million years ago.  Hominid refers to all non-human apes in this article.  Hominin refers to all human apes.

Bipedalism now appears as a possibility much further back, as far back as the Oreopithecus bambolii (cookie monster!) upright Greek ape of 9 million years ago (Wayman, 2011).  The Oreopithecus may actually be very important in understanding bipedalism, as we’ll see later.   However, most of the hypotheses in the article are based on Lucy’s bipedalism

Walking upright in other species

This gorilla appears to be female and is wading through a shallow river. orang-utans also wade in this fashion and both may use branches to gauge depth.

Humans are not unique in their bipedalism.  Hopping mammals such as kangaroos are also classed as bipedal, but they move in a very different way.  Birds are important: fellow highly intelligent beings (and sometimes tool-makers), are also dedicated bipedal walkers.

The Great Apes have their upright walking moments too but their skeletons are not designed for bipedalism.  Orang-utans do the most upright walking of all, which they use in the trees, walking along branches while holding upper branches.  Like gorillas, they also walk upright while wading.

Bonobos (pygmy chimpanzees) are the next great walkers.  These are a more docile and sociable species of chimpanzee that are matriarchal and peaceful natured than common chimpanzees.  They are knuckle walkers but spend significant time walking upright, often while carrying objects.  They can look very human when walking but their pelvis is not designed for bipedalism.

Gorillas do not walk upright very much at all, but it is seen when they are wading through rivers, often holding a long branch for measuring depth.  The young walk upright most frequently and the adult males sometimes rise upright in display.

Our very different physical and skeleton makes researchers wonder what was different in our evolution.  Only we, of the Great Apes, have the pelvis and leg morphology of upright walkers. 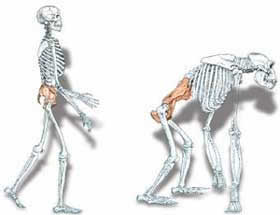 Our skeleton has evolved for walking on two legs (bipedalism) with our curved spine, flat feet, hip and knee rotations and narrowed pelvis.  It’s actually a strange adaptation in some ways: we are less stable on our feet than quadrupeds and a narrowing of the pelvis is very strange in a species whose brains have evolved to be very large.  It would make much better sense for a large brained species to be on all fours, with a wide pelvis for childbirth.  This makes us wonder if the selection for walking in humans was very powerful.  When brains did start to really grow big, in the Homo erectus, 1.8 million years ago, the pelvis was getting narrower.  It’s a strange contradiction.

Why did bipedalism evolve?

Pioneered in the 1960s, savannah theory has now fallen out of fashion.  It was a simple hypothesis: that Africa changed abruptly from dense forest to savannah at the start of the Pliocene.  Once living on the ground, humans became bipedal because of a need to carry food and stone tools, to hunt, and to look over the grass for predators.

Its downfall is very simple.  We now know that the dense forests of Africa did not change abruptly into a savannah, but into open woodlands (mosaic habitat) with lakes and rivers also.  Our australopithecine ancestors were living in trees, not on a savannah, and their long arms for moving in trees are additional evidence.

This leads naturally on from our improved understanding of the ecology of the rift valley.  We can see from Lucy’s skeleton that she was bipedal, but she was also specialised for swinging in trees.  So it is likely she made full use of her mosaic habitat.

Orang-utans walk in trees as they travel high up in forest canopies, also using their arms, so it suggested that this manner of locomotion was how bipedalism was selected for, as this hominid combined walking on the ground with use of hands for carrying and for into and rushing through trees.

One potential problem with this is the possibility that bipedalism may have evolved long before the change to a mosaic environment.

Genetics currently suggest that the split with our common ancestor with chimpanzees took place 7-9 million years ago.

Current dating of Hominid fossils places the bipedal Greek Oreopithecus bambolii of 9 million years ago in the time point (but not at the African Rift Valley where hominin evolution seems to have taken place.  However the Sahelanthropus tchadensis of Chad has been diagnosed as bipedal and is dated at 7 million years ago (Su, 2013)

This opens the possibility that bipedalism was widespread in hominids before the common ancestor split and therefore took place in dense forest.

It also raises the possibility that chimpanzees were once bipedal and evolved knuckle walking as an adaptation to forest floor living (dominant male communities have an evolutionary drive towards greater size in a species, driving apes from trees and to the forest floor, where knuckle walking is the most efficient locomotion).  This is again my own hypothesis.

Potential problems are dating errors: if these early walkers have been dated too old or if the split occurred far earlier than currently believed.

An important new hypothesis appeared in Antiquity journal this year that suggests that climbing may have been important in early human evolution and this takes us back to the African Rift Valley at the start of the Pliocene.  Here early hominins would have been negotiating a rocky terrain with elevations, using their hands, arms and legs in new ways.  This terrain was being generated by the great rift that was, and still is, active here.

Therefore we have hominids climbing, reaching up with their hands, changing their ankle flexion, as they find water, refuge and protein sources on the rocky outcrops.  This would have combined with use of woodland areas and travelling across open ground.

It makes good sense and again, the only difficulty is dating.  Was the evolution of bipedalism before or after the split with chimpanzees?

I’ve left the most controversial until last.  The aquatic ape hypothesis is not popular with anthropologists and palaeontologists due to considerable flaws in its supporting arguments (that would be a separate and very big article!).  It was a wonderfully researched book and did offer a better explanation of bipedalism than Savannah theory, but it has dated itself with its evidence (from human morphology interpreted as aquatic in nature) being now known to be erroneous.

However, there is one possibility in there to be gleaned from it and that is the value of wading in the selection for bipedalism.   Orang-utans and gorillas both travel through water and wade to do so with their arm held upwards.  The Pliocene African Rift Valley had many more rivers and lakes than it does now, and in fact, hominin fossils can accumulate around these extinct lakes and in water deposits.  Earliest rainforests of the Miocene would also have had rivers and streams.

So I have taken this from Morgan’s theory as a possibility suitable for serious consideration.

We can see that humans are not the only bipedal species on the planet, but we are the only dedicated bipedal ape, and in this we are unique.  Therefore there must have been an evolutionary selection factor.

The question though is when and where?  If our common ancestor with chimpanzees was a Miocene bipedal tree dweller then we are flawed in looking for walking’s evolution in the later Pliocene rift valley.  Indeed if arboreal (tree) bipedalism was present in Greece at this time, it may have been a widespread hominid trait during the Miocene.

If it did evolve during the Miocene then it could be that walking in trees and wading were the factors.

If it evolved in the African Pliocene then it is likely that tree walking, rock climbing, wading and walking on open land combined with use of the hands for carrying and tools were factors in its evolution.

Whatever the reasons for our retained and refined bipedalism, they must have been very strong ones, because they defied the difficulties of childbirth and increase in brain-size.  It remains a very tantalising evolutionary question.

Join 542 other subscribers
Follow The Daily Beagle on WordPress.com

← Harald Bluetooth: The Symbol of Communication
The Quest of the House of Columbus →
Join 542 other subscribers